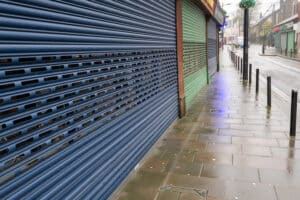 A record number of shops closed last year as the pandemic put unprecedented pressure on businesses.

More than 17,500 chain stores closed their doors, according to data from PWC and the Local Data Company. This was partially offset by 7,655 new openings, but there was a net fall in the number of shops of 9,877.

This represents the biggest decline in the number of shops in at least a decade and is equivalent to a 4.5 per cent drop during the year, nearly one in 20.

An average of 48 chain stores closed every day and the downturn could continue in 2021, the report warns, because many that closed temporarily during lockdown are unlikely to reopen.

PWC and the Local Data Company compiled the report by monitoring shops operated by retailers with at least five outlets across the country. It found that Greater London lost the greatest proportion of shops in 2020, with a drop of 5.8 per cent, while the East of England performed best with a drop of 3.7 per cent. All types of shopping destinations were hit by closures. Shopping centres lost 7.1 per cent of their units while high streets had a net fall of 5.7 per cent and retail parks 3.3 per cent.

Lucy Stainton, head of retail and strategic partnerships at the Local Data Company, said: “The damage to footfall in city centre locations, particularly in London, meant that a number of chains opted to temporarily shut their stores irrespective of their ‘essential’ status.

“The question now becomes — have we seen the worst of the damage? These numbers only include store closures we know to be permanent and when government support schemes end, we expect a further increase in closures.” The report said that retail parks may have fared better than shopping centres and high streets thanks to the success of supermarkets, which are often tenants there, and free parking.

The pandemic and greater homeworking has led to a shift in shopping habits. While inner-city locations are suffering, small towns and suburbs are enjoying a “mini renaissance”, the report found. Some of these effects will prove to be temporary, however, as city centres should recover when workers and tourists return.

Fashion retailers have been among the hardest hit sectors but convenience, discount or essential operators have thrived in comparison.