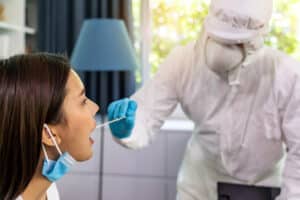 Boris Johnson has backed compulsory vaccination in care homes, saying it would be “wholly responsible” for managers to require them.

The prime minister said the principle was not new because health workers had to be inoculated against certain diseases. “We’ve seen what happened in care homes,” he told the Commons liaison committee. “It’s wholly responsible for care home companies to think of requiring vaccination.

“This is a particularly contagious disease, it can be very nasty indeed. I do think that the basic concept of vaccine certification should not be totally alien to us because after all, when you’re entrusted with care of a patient, or say you’re a surgeon, you’re expected to have a vaccination against hepatitis B. The principle is there.”

There has been concern at the relatively low vaccination rate among staff in care homes, where many of those most at risk from the virus live.

The proposals have been backed by some care home managers. Pete Calveley, chief executive of Barchester Healthcare, which runs more than 200 homes, said his company had introduced a policy in mid-January requiring new staff to be vaccinated and that doing so was a “professional duty”.

He said testing offered three times a week to the chain’s 17,000 staff had demonstrated the difference that vaccination made. Staff who had not been vaccinated were three times more likely to test positive. “Of those who’ve had the vaccine more than ten days ago, 5 per cent have become positive with testing since the vaccination,” he told Today on BBC Radio 4.

“Of those who’ve been unvaccinated, nearly 15 per cent have become positive, so three times the risk of bringing it into the home. We know the devastating impact the virus can have when it gets in a care home and spreads like wildfire.”

Others have criticised the proposal. Mike Padgham, chairman of the Independent Care Group, said: “It has to be by consent, we do live in a free society.”

He warned that making vaccinations compulsory could contravene employment law and become a barrier to recruitment in the care sector, which has 100,000 vacancies. Calveley said Barchester Healthcare had 0.1 per cent of prospective staff decline a job over its compulsory vaccination policy.

About a quarter of care homes in London, and a half in other parts of England, have reached the level of vaccination deemed safe by scientists.

A flexible working law is government meddling in the extreme, which would dash our recovery hopes